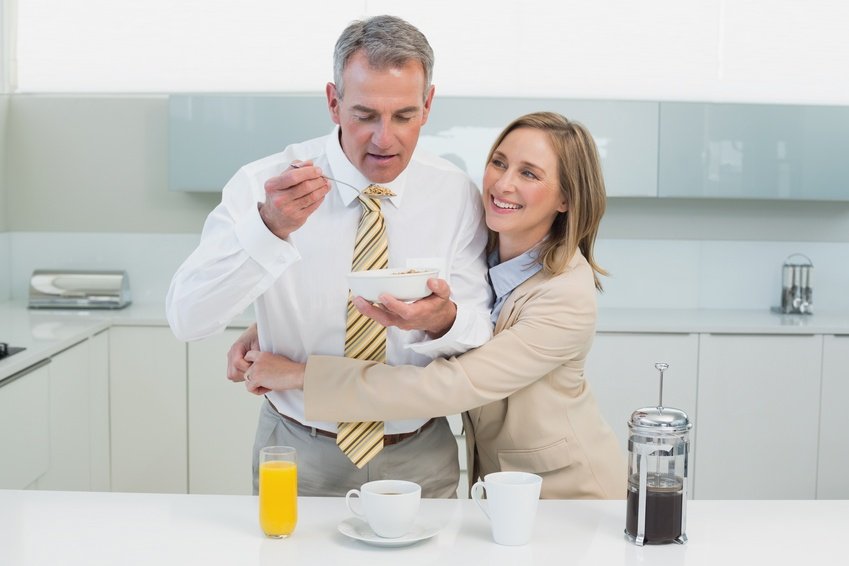 In Marriage, It’s Hugs Before Business

Keith Miller, LICSW shares an intimate look at his marriage to demonstrate a common occurrence for many couples; a focus on life logistics to the extent that one or both feel like a business partner.

The other day my wife seemed to wake up seriously on the wrong side of the bed. I was up early as usual, had gone to the gym, came home, showered, had some caffeine and was feeding the kids breakfast when she joined me in the kitchen. Since my wife had the day off and our car needed to be inspected, the first words out of my mouth were to tell her that today would be a good day to get their car inspected. Looking back on it I was just checking this item off my mental list. I was in “go” mode. In my home, that meant I didn’t have a lot of free time before I had to get out the door and catch the train for my commute into the office.

My wife didn’t have a great reaction to my dutiful request for her to take care of the car on her day off and had launched a counterassault before I could get cream cheese on my bagel.

“Why is it,” she said, “that all you seem to care about right now is getting this car inspected?”

Of course, I was blindsided. I threw up countermeasures of incredulity and disbelief but she persisted. Feeling flat-footed for several moments, my mind finally found its way down the following road: “There’s nothing I did wrong (I’m innocent); What’s wrong with her? Anyone who has an entire day off from work shouldn’t mind getting a chore done—come on, what’s wrong with her?”

“Honey,” I said with a most condescending inflection, “you must have woken up on the wrong side of the bed.”

My mind quickly and automatically swelled with “I’m better than her” thoughts that pushed me further and further away from connecting to the real problem. On some days this short sequence of events could have led to unfathomably nasty feelings toward each other, all while the kids did their best to stay away from the two grown-ups that had suddenly regressed into the marital version of a middle-school playground ruckus.

Does this sound familiar?

I knew we didn’t need to go further into this rut together. There was a way to connect to one another even though it felt evasive at the moment. I knew that even though we had “lost that lovin’ feeling” for each other there was some portal through which we could both enter and emerge again as sane and reasonable humans that care for deeply for each other. I’ve been methodically trained to look for these portals—the tiniest of doors on which couples can simply knock and be granted permission to enter into a world without bitterness, anger, or hostility for each other.

The secret to finding these mostly invisible opportunities for connection within your marriage is to remember this:

You can be right or you can be in relationship.

I was so fixated on heading out the door and getting everything done in my day that I was treating my wife like a business partner.

There’s a saying that’s been attributed to Anaïs Nin, H. M. Tomlinson, Steven Covey, the Talmud, and others: “We don’t see things as they are; we see them as we are.” I didn’t need to hold onto the idea that my wife had woken up on the wrong side of the bed, that she was wrong and I was right. Believing this would have just made us both more miserable. You know what I did?

Taking a different path, I slowed myself down. I breathed….and breathed…and breathed. For the first time I noticed I was in “go” mode and my wife was not. This was critical to what happened next. Noticing she wasn’t in the same state I was curious about her feelings. I then easily connected the dots I had missed before that caused her to cry foul. I thought, “I wouldn’t want to be greeted in the morning with a to-do list.” This made sense to me in a matter of seconds.

I was able to turn to my wife, put my arm around her and squeeze her tight, acknowledging I had skipped right over greeting her the way she likes to be greeted.

“Next time,” I said, my touch dissolving the tension between us like a spoonful of sugar in a morning cup of coffee, “hugs before business.”

Keith Miller, LICSW is the director of Keith Miller & Associates Counseling in Washington, DC. He specializes in both mindfulness psychotherapy and couples therapy and is the author of Love Under Repair: How to Save Your Marriage and Survive Couples Therapy. His blog is called Love Good.