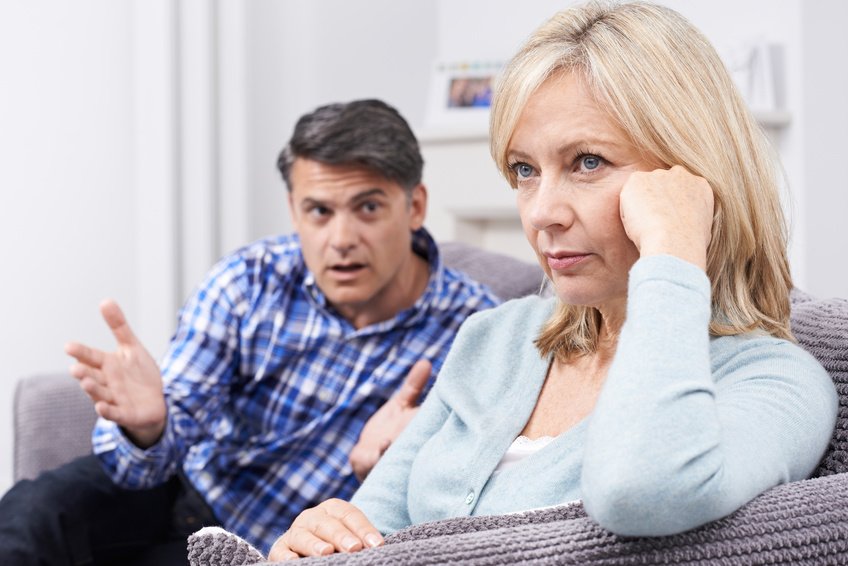 Richard Nicastro, PhD examines why couples fight and proposes that bickering isn’t always the way it seems.  Might bickering in relationships sometimes be…fun?

“You missed the exit.”

“That’s not fair. You know I don’t have my prescription glasses with me.”

“Like you would’ve done any better if you had.”

“A chinchilla rabbit would’ve done better than you.”

“You missed the exit.”

If not in the specifics (I can’t remember the last time I heard someone bring up a chinchilla rabbit in a conversation that didn’t take place at a pet store, or at least a sweater store), then in form. Poke, poke, jab, jab, block, feint, jab, poke, and on and on.

“Why do couples fight?” is one of the most pressing questions people have. And under the broad umbrella of “arguing” is the more specific type of arguing known as bickering…fighting about seemingly inconsequential things—so inconsequential or “out of the blue” that afterwards you may not even remember what triggered the fight.

If you’re married or in a long-term relationship, you’ve probably had an experience that mirrors the format of the one above, seemingly when nothing major is at stake (after all, in the above scenario, it’s not the hospital exit the driver allegedly missed while the passenger was bleeding from an injury!).

Why Do Couples Fight? The Naked Truth About Bickering 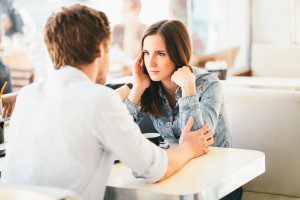 “We’re always nitpicking at each other,” one wife said to me in counseling. Her husband harrumphed, but not in disagreement. Rather, he was acknowledging the truth in that.

And actually, I should amend that: technically, it wasn’t just one wife who said that. Though of course the exact words have varied, through the years it’s been dozens upon dozens of husbands and wives and boyfriends and girlfriends who have expressed the same message: “We love each other, but my gosh, we’re always fighting. And fighting about little stuff.”

There are some things I’ve picked up in my years as a couples counselor when it relates to bickering in marriage or long-term relationships, but before I share those, I want to underscore a point in the previous sentence: We love each other. The discussion in this article presumes that you love one another and that you’re committed to the relationship. Otherwise, bickering could signal one (or both) partner’s attempt to passively leave the marriage by making things so intolerable that the other partner will have no choice to cry “Uncle!”

The bickering we’re talking about today is the kind common to couples who love each other and who want to be together. It’s not a symptom of a lack of commitment. It’s more of an irritant than anything, not a glaring attempt at escape or sabotage.

And one more important note before we move on: we are talking about bickering here, not abuse. (Bickering is verbal back-and-forth that does not seek to wound or destroy. It can be annoying and pervasive and distracting, but it is not abuse.) Any type of abuse—verbal, emotional or physical—is never justified and should not be tolerated or condoned.

Let’s shed some light on bickering in marriage

First of all, I’d like to challenge the notion that you’re constantly fighting.

“We’re always fighting.” … Is that true?

I don’t mean to imply that the couples who make this statement are lying to me or somehow being duplicitous. Not at all! They truly believe that they are “always” fighting. But it’s highly unlikely that that’s literally true. What’s more likely is that they don’t notice the times they’re not fighting. Those tend to slip under the radar. The squeaky wheel gets the grease, after all. Also, since they’re on alert for relationship problems or marital issues, they’re more attuned to the fighting (most people don’t decide to come to counseling when things are going well).

When you decide to bring your car into the mechanic, your ears are only listening for that strange new thump. It’s tuned out the parts of the engine that sound fine.

The words we use—whether spoken words within our marriage, or the inner words in our heads—are powerful shapers of our experience. Sometimes we overlook the good in order to focus exclusively on the bad. And whereas that might work for a surgeon when she’s operating on a patient, it’s not the best approach for your marriage.

It’s true that many couples have fought while in their counseling session in my office, and many of them do not fight while they’re sitting with me—even the couples that swear they are constantly fighting. Sometimes I’ll point out to them that they’ve gone a half hour or more without a single bicker—without even the whiff of a bicker—and they’ll be most surprised. Almost caught off-guard by that realization.

Still, there’s the issue of bickering. Perhaps you’re sniping at each other more than you’d like in your marriage. So what’s the deal with the little things couples fight about? If you’re asking yourself, “Why do couples fight or bicker?” you are most certainly not alone!

1) Bickering can be an emotional shell game.

You may notice that you tend to bicker more when you’re feeling stress. Bickering about something seemingly unrelated to the 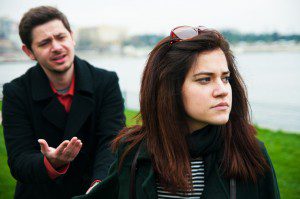 anxiety you’re feeling is a safe way to release some of that stress.

For example, you’re about to receive an award at work. You’re getting ready for the award dinner, getting dressed in the type of fancy clothing you rarely wear. Your speech is ready on index cards. Although you’re happy with it, you’re understandably nervous about presenting it to all the dinner attendees.
Your husband walks into the room and asks if there’s anything he can do for you. He knows you’re nervous, and he’s offering his support. You know that. Instead of acknowledging that, though, you look at him in the mirror, freeze your mascara wand in midair, and let out a yelp of distress.

“That’s what you’re wearing?” you ask, turning around.

“It’s my best suit!” he replies, brushing off the sleeves.

“That’s not saying much.”

“Hey,” he says, wounded, “we talked about this. You agreed.”

“When did we talk about it?”

“Last week. Don’t you remember? It was when we were cleaning up after our meatloaf dinner, and I said—”

“How did I agree?” You stick the wand back in the tube of mascara, wishing it were a fairy wand that could transform your husband’s suit to your liking.

“You said, ‘Hmm-mmm’ or ‘Uh-huh’ or one of those agreement-type phrases.”

“That doesn’t mean I heard you!” you say, exasperated.

“Don’t call me crazy! The firm doesn’t give awards to crazy people!”

You get the idea…

So what’s going on there? Is it really about your husband’s suit? Or is it more about the fact that you’re uncomfortably nervous about the evening, and bickering with your husband can distract you from your anxiety, even if just for a little while?

Could it be that the stress over public speaking was incredibly uncomfortable for you, and when your husband walked in, you unconsciously relieved some of that stress via the spat you initiated? 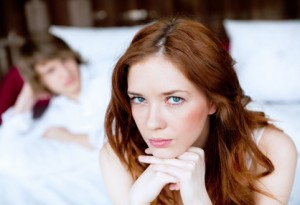 In that sense, bickering is like a shell game, taking your mind off something that’s really bothering you and putting it onto something else. And since your partner will most likely push back and defend (“Hey! We talked about this!”), your mind becomes even more caught up in the distraction…there’s someone on the other side, provoking you. There’s someone challenging you to think on your feet, come up with a reply, defend yourself, etc.

You don’t have to do anything about this. You don’t have to force yourself to change. Just knowing the purpose that bickering serves in this type of scenario is a huge interpersonal leap in and of itself. If you wanted to, you could take a step back—right then, or on the way to the banquet, or the next day even—and let your husband know that your nerves got the best of you and you picked on something that wasn’t a huge deal.

Some communication in marriage is better than no communication. So before you throw bickering out with the proverbial bathwater, realize that in those moments, prickly as they may feel, you and your mate are communicating.

If you’re doing more bickering than smoothly communicating, though, you may be motivated to learn how to communicate more effectively with your spouse/partner. Contrary to popular belief, you can learn how to communicate more effectively, whatever your communication history. If you don’t have a local couples counselor that you trust (or if your mate isn’t sold on the idea of counseling), you can check out my ebook, Communication Breakthrough—it contains the same exercises and strategies that I’ve used with couples for years.

In asking why couples fight, especially when we look at the things couples fight about overall, we have to explore the possibility 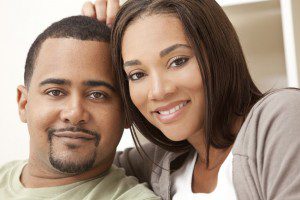 that at times, bickering can be fun. Sometimes we’re itching for some mental sparring. (It’s a form of stimulation.) And who better to spar with than the person who knows you best, with whom you feel the safest, the one you spend the most time with, and the one who gets on your nerves more than anyone else (that’s inescapable, and naturally goes along with spending the most time together, not to mention meshing all the details of your lives).

Sometimes, just sometimes, a “good bicker session” can feel like a form of sports or edgy recreation. This isn’t always the case, of course, and it can be hard to recognize in the moment. But look at the example we started this article with: the fact that one partner came up with “chinchilla rabbit” points to someone having verbal fun, right? Even if s/he was truly annoyed with her partner for missing the exit.

When you feel like you want to do something to reduce the bickering in your marriage, there’s something you should remember:

Focus on increasing positive interactions, rather than extinguishing the negative.

You’ve heard the phrase “what you resist, persists.” It’s a truism that when you fight something (even if it’s fighting itself!), it tends to get bigger. That’s why Mother Teresa, when she was asked to participate in an anti-war rally, declined. She said she’d be happy to take part in a peace rally, though. She knew the focus should be on the desired outcome, not the thing to be eradicated.

It’s the same for couples. This isn’t about denial or avoidance or “pretending” you never fight. Rather, it’s about coming together to create more positive moments and noticing them. That’s the most effective way of naturally reducing the negative interactions…boost the positive ones.