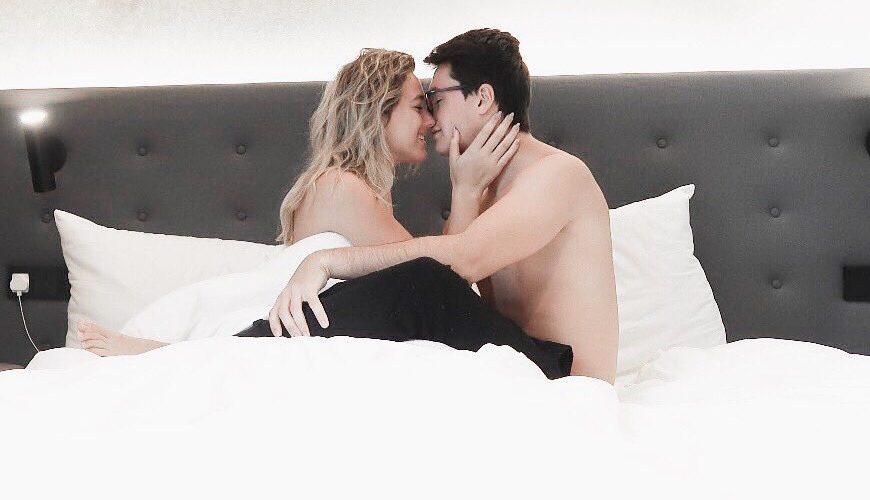 This piece was written a few years ago.  A lot has happened in the world since, especially in 2020.  Sam and Monica recently crossed my mind and I did a little investigating to see what’s been going on since.  I was delighted to see their love story continues, not in a straight line as is nothing for most of us with COVID, yet they continue to press on despite being an ocean apart.

How do you make a long distance relationship work?  This is one of the questions I’ve been asked the most by couples all over the world.  My short answer is focused intention, effort, prioritizing each other, frustration tolerance and creativity.

This young couple in their early twenties met through a friend in a whirlwind three years ago.  He is British and she 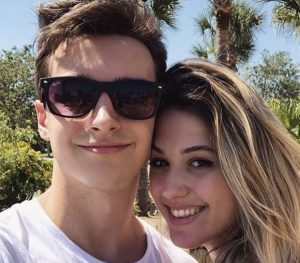 American.  Let’s just say they met via text through a friend, she flew across the pond to meet him shortly after, they spent a few weeks together in the South of France, then he asked her to be his girlfriend and she said, “Yes.”  Did I say “whirlwind?”  The rest is the tale of an international love affair meticulously documented for their combined 300,ooo social media followers who are clearly enamored with this likable duo with sharp wits and obvious savvy.

Sam and Monica spend about half the year apart in approximately 2 month stretches, flying back and forth with a lot of travel adventuring in between.  Sam is a go-getter on steroids running two businesses in the UK, in addition to the social media management company he and Monica run together.  The plan is for him to move to Florida in about 5 years, as they agree they are not ready for marriage and he’d need to tie up business ends on his end as well as sort out a visa before that could happen anyway.

I’m not gonna lie, this couple is almost too cute to believe.  I spent some time studying them (which is not hard to via their relationship channel on YouTube as well as their individual social media accounts like Twitter where whoever is interested can either engage with them or be a voyeur).  I am fascinated not only by the brilliance in their use of the this media (as 20-somethings are known to be) but the inspirational content for other couples in long distance relationships.  And they have an army of relationship cheerleaders and supporters who are clearly behind Sam and Monica.

True, many in a long distance relationship are likely not afforded the luxury of the frequent travel of these two, but Sam and Monica definitely have something special and wisdom to impart to couples of any age.  Their humor seeps through in a really delightful way which makes them particularly relatable and enjoyable.

I interviewed Sam and Monica via e-mail and here is what they had to say:

What do you love the most about each other?

Sam:  The thing I love most about Monica is how selfless, genuine and kind she is. She’s one of the very few people I’ve ever met that genuinely cares more about her loved ones more than herself and puts their happiness ahead of her own.

Monica:  What I love most about Sam is how ambitious and motivating he is. Because of him, I feel more accomplished and much more motivated to work harder. He is incredibly smart – it’s kinda ridiculous! On top of that, he is by far the funniest person I have ever met! Every single day, he makes me cry laughing with his silly jokes.

What are some of the ways you stay connected? 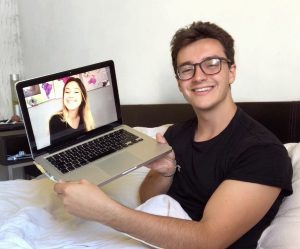 Sam:  We both talk every day via Skype and have ‘online dates’ – I.e. watching movies at the same time while on Skype, cooking the same meals and eating dinner/lunch together, playing online games etc.

Monica:  A few of the ways we stay connected is by obviously video chatting a few times a day, having online dates, sending each other secret gifts in the mail and even leaving things for each other when we go home for the other person to end up finding.

What has been the hardest about having a long distance relationship?

Sam:  The visa situation – we want to live together and start a real life together but can’t as it’s quite literally illegal to live together either in the UK or USA until we get a visa sorted. But, visas are thousands of dollars and we don’t qualify for any visas at the moment.

Monica:  The hardest part of having a LDR is definitely the time difference. Being 5 hours apart, is super hard because when I’m having lunch, he’s ready to go to bed. When I’m having dinner, he’s already been asleep. So I live half my day without him and the other half is just FaceTime that cuts out.

Has jealousy ever come up for either of you and how do you handle it?

Sam:  I used to be a full-time male model and she regularly got jealous. There was one time when I was on an Italian island shooting with a few girls and Monica really wasn’t happy with one of the images which looked like I was kissing one of the girls (I wasn’t – it was purposely shot to look like that). I’ve never been the jealous type so never had any problems on my end.

Monica:  Jealousy has come up before. He used to model and constantly be around beautiful girls, and as someone who is insecure with themselves, it makes me feel uneasy. I would just feel as if he was going to find someone better. But now, I’m comfortable with myself and so happy in our relationship, so it doesn’t bother me anymore. At the beginning, it was tough!

Are either one of you more physically tactile than the other or a cuddler?  How do you deal with lack of physical contact and sleeping alone if these things are really important?

Sam:  Monica definitely needs more physical proof of love than I do – she’s much more emotional, too. We both love cuddling but there comes a point when I have to work and she just wants to laze around and cuddle all day!! I don’t have too much trouble sleeping alone – what bothers me most is feeling bad for Monica as she hates it.

Monica:  Thankfully we’re both huge cuddlers…haha… but I’d say I definitely want to do it more – it’s kind of hard not too when you’re next to someone so beautiful…haha. When I have to sleep without him, it’s so hard. It’s embarrassing to say, but I have to sleep with my lights on and have a video playing in the background. It never gets easier.

How do you deal with challenging emotions that come up related to being so far away for much of the time?

Sam:  I’m not a very emotional guy (which Monica sometimes hates as I can’t really relate to her) so the distance doesn’t bother me as much as Monica. I can redirect my emotions into being productive much easier than Monica can so do just that – whenever I’m not with Monica, I channel my emotions into work and get as much done as possible before I next see her so we can spend as much time together as possible when we’re next together.

Monica:  There’s so many challenging emotions and as someone who is overly emotional, it’s super hard. I try to keep myself as busy as possible so I don’t have to mope around thinking about how empty I feel. That’s one of my biggest points of advice – just keep yourself busy and be productive!

Have you had moments where you’ve wondered if it would work?  How do you get through those times?

Sam:  At the start of the relationship, we had to have all the awkward conversations and move a lot faster than regular couples 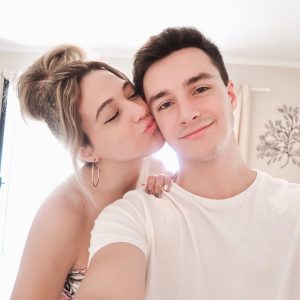 to try and get a good idea of whether it’ll work or not as we knew from the start it was going to be a very expensive relationship so we wanted to make sure we had a good chance of working out. We rarely argue or doubt things now but, when we do, we always talk them out (well, I do, anyway. Monica sits there quietly until I figure out something is wrong and then it takes me 25 minutes to get it out of her!!).

Monica:  At the beginning of the relationship, it was definitely kind of like “is this gonna work?” Because we were young and we didn’t have our business yet so I was working at a restaurant and didn’t think I’d be able to travel back and forth. Thankfully, we now both work online and earn comfortable money so I don’t get those thoughts. We got through it because of our business! It gives us so much freedom and obviously helps us to afford the relationship!

What do your families think about your relationship and business together?

Sam:  At the start of our relationship our families were less supportive than they are now simply because they didn’t understand how we could spend so much money and time on someone we barely knew. As soon as they realized it wasn’t just ‘puppy love’, though, they started supporting us more and more. At this point, both families are pretty much begging us to get married!

Monica:  My family is so supportive towards our relationship! They always have been! Sam’s family is very supportive as well. We’re super lucky to have parents who accept our crazy relationship… haha. They’re very proud of what we’ve accomplished between our businesses.

Does the other have an annoying habit?

Sam:  Her most annoying habit is waking up at around 11am every day. In a way it’s good as I get a few hours of work done before she wakes up but still frustrating at times!

Can you give me one nugget of advice for other long distance couples around how to stay connected when apart?

Monica (and Sam agreed):  One important thing of advice on staying connected is, spice up the relationship! Have an online date, surprise your partner with a letter in the mail, just little things – they go a long way. Make sure to stay in contact everyday but don’t talk 24/7 or else there won’t be anything to catch-up on!